What is the ideal OEE score?

Is it better to close the factory below a certain percentage?

No, of course not! Or well, maybe that would be better in some cases…

But seriously: there is no such thing as ‘an OEE number’ because it can be defined in a thousand different ways. It is generally suggested that a value below 65% should be considered unacceptable.

But in reality, it is not so absolute.

Ideal OEE score? How not to do it

First, we will give you an example of how it should not be done.

Let’s say, your goal is an OEE of 85%. We change some of the definitions, lower the maximum speed, exclude some waiting times like breaks and maintenance, stretch the specifications of good product, etcetera,

Please stop! Obviously, that is not the way to do it. But there are managers and consultants out there who earn money in this way.

What is a good or ideal OEE?

First of all, it makes no sense to focus on the number by itself. This is a style of thinking that many people have a tendency to. But in the production environment, it shows a lack of profound systemic knowledge. Instead of looking at a number, you should understand what is really going on.

An example:
Let’s take the machine that runs one product all day, feeding a line.
Is 95% OK?
Not if the downstream equipment would only process the volume of 65%.
Would 65% be a good OEE?
Not necessarily, when the machine jumps back and forth between 45% and 95%, with an average of 65% OEE, it would still cause many problems.
Now we have a stable OEE of 65%. Is it OK now?
Not if it runs at a quality rate of 90% – or any other number that is not near 100%.
What if it is stable at 65% with a quality rate of 100%?
If we need to make huge and expensive efforts to get this done, now your costs are so high you may be losing money.

What questions should you ask?

Stop focusing on the height of the number, start focusing on those components that may be indicators for an understood and controlled process. As a result, the number will go up and costs will go down. Now, this is the reason you may have a need for OEE software that allows you to make exactly such analyses.

Most machines will not exceed 35 to 45% of OEE (assuming OEE Industry Standard definitions being applied). In some industries, the typical machine runs far less, while in others it can be higher. Some particular types of machines tend to have higher OEE rates by nature and the stage of development of the equipment.

After some years of TPM implementations and applying lean principles to prevent the loss of flow, equipment may grow to 60% or even 70+% which (as a number) is quite good. But only when at this rate you are fulfilling the demand of the customer. Filling warehouses very effectively means creating a loss effectively.

Does it mean that the average machine – that is running 35-45% OEE – is running economic loss?

Most of them earn quite some money. The conversion cost is not just a small part of the total cost. This explains why such low OEE rates are commonly accepted. The real economic loss lies not in the height of the OEE, it is in the lack of flexibility and reliability of it. What would it mean to the cost of the supply chain if every step would respond and follow the demand? Just imagine the economic consequences. 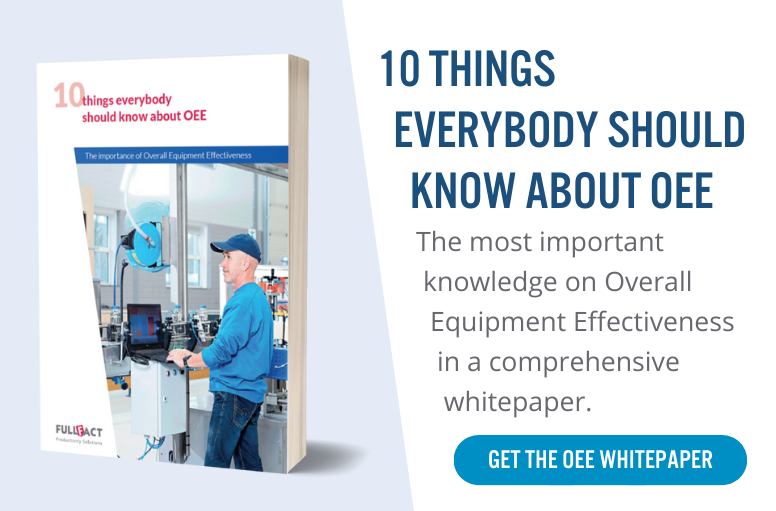 FullFact Solutions, a leading Dutch supplier of OEE (Overall Equipment Effectiveness) and productivity monitoring solutions, and TSS, a leading company with 30+ years of experience in the field of digital visual communication solutions announced their partnership. The...

END_OF_DOCUMENT_TOKEN_TO_BE_REPLACED